Even a Housewife Needs a Vacation!

I just got back from spending 3 days on the California coast, down in the Big Sur area. Big Sur is south of Monterey and Carmel, maybe about 30 miles or so. I was actually in a little spot called Lucia, about another 20 miles or so away and staying at a monastery! The place is called New Camoldoli Hermitage and the men who live there are Roman Catholic Monks. They run a retreat/hostel kind of place where people can come to do whatever they wish to do, in silence. It's a spot for religious contemplation of course but also a place where a person can be quiet for awhile. There is no available Internet, no television or radio, and no talking on the grounds. I live in a small rural area that I thought was quiet and not busy. Boy, was I wrong! This hermitage is the essence of quietness and non busyness. That is a good thing!

Anyway, while I was there, I went to a couple of spots to go hiking. The first place was Point Lobos State Reserve, as shown by the first  two shots above. I also popped in to Big Sur State Park (next 3 shots). While I love the ocean, I really, really love a good redwood forest. Big Sur State Park had everything that you might want: redwoods, chaparral, bay trees, manzanita, wildflowers, and banana slugs! When I got to the top of all of the switchbacks, where the bees and manzanita were, I could see 360 degrees all around. I saw the ocean and then turned to see the mountains. What a treat all in one go!

As I was hiking, I must have greeted and talked with at least two dozen or so people. I was heartened to see all sorts of folk-people of color, kids, older people and everyone else in between. Good news I think. I have to say too that this was possibly the most joyful hiking experience I have had to date. I can't remember feeling so connected to my fellow hikers and being so appreciative of my surroundings. I think sometimes you are simply in sync with what is happening around you. And thank goodness for that.

Before I left on my trip, my friend (and hairdresser) asked me why I was going; what I hoped to get out of the vacation. I honestly couldn't answer her. I didn't have a real agenda other than to be able to pry myself out of my routine and to go somewhere on my own, a place that I picked, and do something. I was kind of amused by staying with the monks and going to a service but that was it. I knew too that I wanted to hike, and I did that. Beyond those things, I didn't form any ideas of what might happen.

What was the takeaway? I found that with the silence I was able to think a bit (big surprise that the Internet sucks up your thinking time and makes a bunch of mental noise) and to actually hear myself for once. I was able to do some personal writing which helped. I was also able to answer the question of what I was doing. I think that over time, a person can stop paying attention to themselves; can stop taking in new things that add to their own personal experiences. Those new things are part of what "builds" a person. If you are just focused on being part of a group or couple, or focused on working or being on the Internet or whatever it is that has you twisted up, you might stop "feeding" yourself, so to speak. You might even get a little lost. And it's insidious. It sneaks up on you. You might think that you are taking care to feed yourself well enough, but the truth is that you are probably falling short. You won't know it until it's a little later than you might like.

I will share one of the questions that I wrote down. Maybe it's one you might want to think about too? "How will I continue to form my own ideas about God and my place in the universe?" This question, it isn't small! It's worth considering. My answers had to do with openness and flexibility of thought. Keeping an open ended attitude towards both the new ideas of others and your own ideas is important. I think where many of us fall down is in our rigidity of thinking. How often have you stopped hearing someone because you thought you already "knew" about that subject? Or you stopped listening because you already had an opinion on something? I call this a general kind of resistance and frankly, I do it a lot. I don't mean to suggest that every kooky idea must be considered but you can at least stop yourself from totally shutting down and can then say, "Hey, wait a minute. What about that idea?" I think that in the long run, a willingness to consider something (even if it makes you uncomfortable or you suspect that it is flat out wrong) will create a kind of fullness in your life and that may in turn help you to form your own ideas and to see just exactly where it is that you fit in to the world.

All in all, I am just as pleased as punch that I went. I was able to make the drive which is no small feat considering the shoulder, neck and back pain that often plagues me. The weather was pretty great and there were plenty of wildflowers to check out. My room was spartan but serviceable, I had my quilt and electric blanket, enough to eat and lots to see. Not a bad trip for a housewife!

Alright, thanks for reading. Feel free to leave a comment.
Libby

Please feel free to comment but understand that I will not publish something hateful, mean spirited or irrelevant to the blog post. 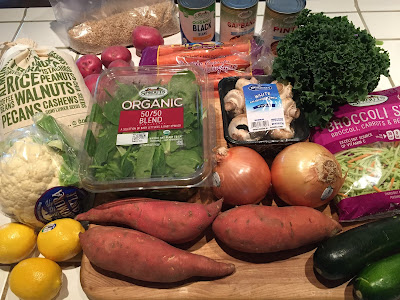